History of the Wedding Dress 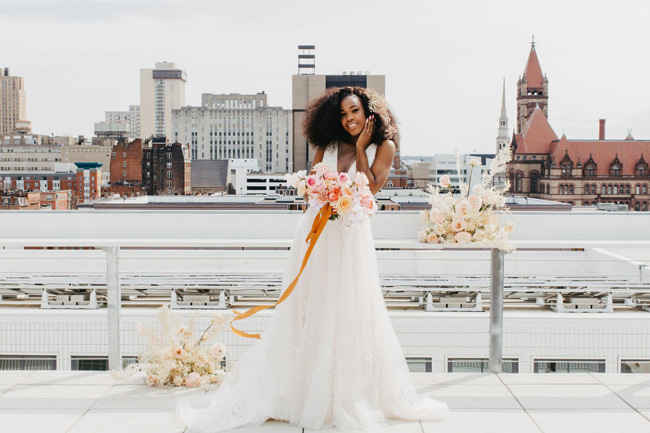 Prior to new medicine, a long and healthy life was not really that easy to attain, but other people attempted to make sure that they had outstanding chance for success by following superstition. Many superstitions grew over the years around weddings, to bring about the brides happiness in her new house and of course to guarantee her fertility. The colour of the wedding gown was believed fashionably to bring luck to the couple.

White, or a form of white, was, after all always the favourite and symbolised a woman’s virginity and virtue in the face of her imminent change of circumstances. White, though, was not always the favourite choice and was considered not practical for most purposes. Blue (worn by a bride in 1870, whose wedding dress is displayed in the London Museum), with its connection to the Virgin Mary, represented a robust image of purity, which, by tradition symbolised faithfulness and never-ending love (this gave rise to the reason that sapphires were used in engagement earrings). Brides, who wore blue at their wedding, believed that their husbands would be faithful to them, so even when the wedding dress was not blue, they would ensure that they wore something blue on their wedding day. This is where the tradition that has survived to present day, came from.

Another popular colour was pink; this was considered very appropriate for a May wedding. Pink flatters most complexions and is associated with the bride’s girlhood, but a few superstitions said it to be unlucky, as the quote state “Marry in pink and your fortunes will sink”! Mrs Joseph Nollekens was very much considered fashionable in 1772 in her saque gown made from brocaded white silk embellished with delicate crimson flowers. She also wore shoes made from the similar material, which had heels of three and a half inches (approx. 8cm). Deeper shades of red were unquestionably taboo by the Victorian era, with the reference to scarlet ladies and hussies.

One of the most unpopular shades was green. This was thought to be the colour of the fairies, and it was considered bad luck to call the attention of the little people to oneself through a time of change. Green was also linked with the lushness of verdant foliage and it was believed that it could cause rain to spoil the wedding day.

Reminiscent of the days of homemade clothing, any natural hue of brown or beige was once considered very bucolic. And the saying is “Marry in brown you will live out of town” and implied that you are going to be country bumpkin and that you would never be able to do well in the city.

The intense shades of yellow have varied in popularity. During the eighteenth century it was considered THE fashionable colour for a short time and many would wear it for their wedding day, like a bride of around 1774 whose wedding dress is in the Gallery of English Costume in Manchester. However prior to this time yellow had been related to heathens and non Christians and would not be worn in church as it was considered an unholy colour!

A very common colour wedding dress, for brides from lower class families, was grey, mainly because it was a very useful colour that could easily be re-used as Sunday best, being considered extremely well thought-of. Mary Brownfield chose grey twilled silk as suitable, as a maiden woman of 32 years at the time of her marriage in 1842. Grey was associated with women in domestic services during Victorian times, and they would frequently be supplied with a brand new gray dress once every 12 months by their employer. The deeper shade of gray or black was banned, as it was linked with mourning and of course death. As a matter of fact it was once seen as such a loathsome harbinger of bad luck, that in a few places even the wedding guests were not allowed to wear it. A recent widow would adjust her mourning dress for a red gown for the wedding day, to protect the bride. At the same time this deepened the aversion towards red, which was once considered as bridal mourning.

For the brides who were compelled by personal economics into wearing a dress which would soon become their every day wear, would embellish it for their wedding day with temporary decorations. In fact up until the nineteenth century, ribbons were tied into bows or “love knots” and loosely affixed to the wedding dress. “Bride Laces” as they were called would be pulled off by the wedding guests during the wedding reception, and would be kept as wedding ceremony favours, or souvenirs. This practice steadily died out and was replaced with flowers instead. Guests could be given floral button-holes to put on, and the bride may wear flowers in her hair either as a corsage or garlanded around her Wedding Dress, otherwise she can carry them as a bouquet. Myrtle and Rosemary were two of the early favourites. Orange blossom became fashionable in the 1830s. This practice has, in fact, remains to present day – Regardless of how simply dressed; many brides will have included a flower or two somewhere within their outfit! Charlotte Pennell married George Hill in 1910, when she was nearing 40 and never had any intention of wearing a “once only” dress. However she did embellish her fashionable attire with a posy of flowers in her hat and had a matching bouquet.

The “conventional” wedding attire as we now know it now first appeared in the latter part of the eighteenth century. With the beginning of mechanically made fabrics and inexpensive muslins being imported from India and with styles inspired by the classical world, by eighteen hundred a white wedding gown with a veil was fashionable choice. As was usual with fashion, it started in London and soon extended to other cities and eventually to the country villages. This new fashion was given the royal approval when Princess Charlotte wore this style of attire at her marriage to Prince Leopold of Saxe-Coburg in 1816. Queen Victoria in 1840 selected Honiton lace and white silk for her wedding which made it the fashionable rule. Also setting new fashion, the Queen was to be one of the first royal brides to have had bridesmaids carry her train.

Even a bride in the nineteenth century, who decided to wear a white wedding dress, would have expected to wear her dress again. For the season of “bride visits” she would visit close family and friends and as a newly married woman, she would wear her wedding dress, with the decorative flowers and train removed. A more affluent bride might then modify the bodice of the outfit (frequently made independently) and re-trim it for evening attire or for any other occasion. Queen Victoria herself took off the lace overskirt from her Victorian dress and regularly used it again, she was to wear it over a black silk gown for her Diamond Jubilee festivities over 50 years later.

Up until the Nineteen Twenties wedding gowns were always in fashion, just more elaborately embellished than standard and maybe slightly more modest than the most daring fashion. During the 20’s however, there was a complete revolution in all women’s clothing, where skirt hemlines rose from just above the shoe to well above the knee. To begin with wedding dress styles followed and brides would show their ankles; however as skirts grew ever more shortened, it seemed that some felt that it was not suitable for services in church and most brides gave preference to full-length wedding dresses. This choice of either following the seasonal fashion or reverting to a full length wedding dress and train led to the devolvement of completely separate style during the twentieth century which would sometimes echo but more often diverge from mainstream fashion (like the Vionnet couture design of 1926).

This change was magnified by the interruption caused by the Second World War due to clothing being rationed, uniforms were everywhere, and light-heartedness was looked down on. At the end of the war, fashion returned and brides were evermore keen to wear long wedding dresses made from sumptuous fabrics for their wedding day. This trend took place irrespective of the growing popularity of casual wear, easy wear apparel and trousers for women. As fashion has developed into a more at ease and sporty attire, wedding fashions have deviated further, so much so, that although each decade’s brides can be easily distinguished through the fashion then in vogue, it is not because of the fact that that the fashion’s resemblance to typical fashion.